This article was originally published on MarketWatch:

If buyers in the Seattle real estate market are hoping for a bit of cooling off in the fall, they’re in for a surprise. Home sales are even hotter than they were in the summer, and there’s no sign of slowing down.

Buyer competition and lack of available properties for sale are pushing prices upward and making bidding wars commonplace. Seattle’s inventory of real estate for sale was at just one month in September (a balanced market would have four or five months), and has held at that level for an entire year now. We haven’t seen a constricted inventory market like this since 2006, and nothing on record has been as prolonged. 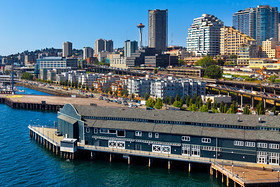 Interested in more on the Seattle market? Check out these listings

With the same number of properties being sold every month as come on the market, home buyers in the area have become comfortable with the process of making offers above list prices, and making them the first weekend the home is available. That has pushed the average sale-to-list price ratio to 103.3 percent in Seattle, a number we haven’t reached in a decade. The average home seller is netting significantly more for their home than the advertised price.

The most common situation we see real estate agents employing in the current market is to list a property on a Wednesday or Thursday, and review all offers from buyers on Monday evening. It gives buyers ample opportunity to view the home, but focuses buyer competition at one point in time to maximize the seller’s returns. With the abundant number of buyers in the market, it’s the exception when a well-priced property stays on the market more than a week.

Much of the boom in Seattle real estate is fueled by technology workers relocating to work at Google, Amazon, Facebook and Microsoft. The Seattle market has become a less-expensive location for tech companies to fight the intellectual labor wars than their traditional homes in the San Francisco Bay area. Housing and salaries in Seattle are pricey compared to much of the nation, but are still significantly less expensive than New York, Los Angeles and San Francisco.

As rent prices continue to rise in Seattle, so does the attractiveness of buying. Many technology transplants view their new location as potentially temporary, so they’re willing to pay a premium for a long-term rental. Corporate rentals have pushed rental prices up significantly in locations like South Lake Union, where Amazon is headquartered. New condo buildings like Insignia will give some new home buying options to local residents, but the rate of condo building in Seattle is still not nearly enough to keep up with the growing population.

If September is any indication, we’re not ready for the usual fall slowdown in Seattle real estate The water is still very, very warm out there.

Sam DeBord is managing broker of Seattle Homes Group with Coldwell Banker Danforth and 2016 president-elect of Seattle King County Realtors. You can find his team at SeattleHome.com and SeattleCondo.com.